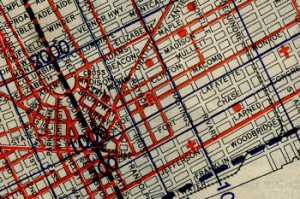 During World War I and for at least two decades afterward, hundreds of Indian Muslim maritime workers made their way to Detroit and Dearborn, Michigan after jumping ship or being left in port in New York, Philadelphia, and Baltimore. They found work on the assembly lines of Ford auto factories, or in steel production – labor that drew on skills they had developed firing furnaces in the engine rooms of British steamships. Most of these men settled in the neighborhood of Black Bottom on the Eastside of downtown Detroit. This was a predominantly African American neighborhood – home to thousands of men and women who made their way to Detroit from all over the U.S. South as part of the Great Migration. In a corner of Black Bottom, however, were a series of makeshift rooming houses for immigrant auto workers – Greeks, Arabs, Afghans, Turks and others. These included several run by, and catering to, Indian ex-seamen: Idris Ali’s roominghouse at 153 East Lafayette, Anoar Mohammed’s at 780 East Monroe Avenue, and Wozid Ali’s at 584 East Fort Street. Although these romminghouses were home to a fairly transient population of ex-seamen, who often returned to maritime work and to the subcontinent after a time, several Indian men married married within the African American community and settled in Detoit for good.