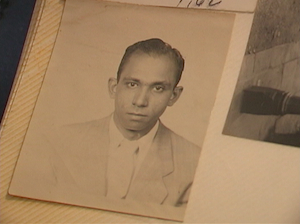 A guest post from S. Nadia Hussain, about the recent loss of her great uncle, Masud Chowdhury, one of the early members of New York’s Bengali community, who came to the city in 1946. Reposted from the blog Nadia Won’t Shut Up (Read more about Nadia at the end of the post.)

My great-great grand uncle passed away two weeks ago. He seems like a distant relative and maybe blood wise he may have been, but heart-wise he was like my own grandfather. It’s been hard, after spending a whole day at his funeral service, Muslim prayer service and burial; I was mentally and physically exhausted (especially because I spend most of the day in the car shuttling between Long Island, Manhattan and the middle-of-nowhere, PA…all in all about 10 hours of driving).

My uncle was Masud Chowdhury, one of the first Bangladeshi men to immigrate to New York City, way back in the 40′s. He opened one of the first Bangladeshi restaurants in the city. It didn’t end up lasting, but even in these past few years whenever I would stop by his house, he would cook up a storm for me. It was crazy seeing a man in his 80′s who shuffled when he walked, to grab fresh goat at a local store, and bring it back to his apartment in Harlem just to feed me curry. That’s just how he was, even up till very recently.

He was a POW during WWII for the Indian Army I believe on the Burmese border. He supposedly escaped and lived on eating bugs to survive. I wish someone wrote this man’s stories down. I wish that I did, I wish that I had the time to even do that.

It was difficult to understand him these past few years, mostly because he didn’t have his teeth in. Regardless what I did understand was hilarious, he cursed the Bush government, made jokes (ones that he laughed at harder than anyone else) and never lost his shine. He was so spunky, he was never a cranky old man to me. He always had that New Yorker attitude. After all, he was a New Yorker, Bangladeshi yes, but he spent most of his life in NYC. His life in many ways played along with this history of that city.

New York City lost a son, though he may not have made the front page of the New York Times. Bangladesh lost a son, an ambassador sent so long ago as a young man making his own journey to a strange land, a land that many of his countrymen would not arrive at until almost two generations later. It was he who enabled my own family to immigrate to the United States. My uncles came because of him, my parents came because of him. I am an American because of him.

Most of all however, I lost my Nana. I know that he was in his 80′s, but it doesn’t make the loss any easier. I was glad to see that he had so many that loved him. I saw his love in the tears that fell from the eyes of all those around me during his funeral day. Even those who could only stop in for a moment had eyes reddened by the sorrow of saying goodbye.

I got to visit him one last time, after Thanksgiving this past fall. At least I got to say goodbye. He had lucid moments, but many things that made him my Nana were fading away. During this visit, his personality would suddenly burst through, but then recede back just as quickly into the fog of old age. Right before I left and said my goodbyes, he called out my name and I went to him. It pains me to admit this, but I couldn’t really make out what he told me, but as far as I can recall he told me to stay with him, I think he asked me if I would stay.

I guess I am staying with him, because when you love someone, you never really leave. The grief for them may go away for a little bit at times, but it becomes a part of you. Sometimes when I am quiet my mind just drifts back to him, drifts back to my memories of him.

I guess I should be happy that he is in a better place, but I am selfish. I don’t want these people I love to leave. Old age isn’t an excuse, I know it’s a part of life, but I’m not ready. I didn’t want my grandmother to leave either. I mourn them both, I wish they hadn’t left. I miss them both, all the time…

Bye Nana, I am missing you. I will love you always.

S. Nadia Hussain is a Bangladeshi American activist, poet, blogger and photographer. She lives in Oakland, CA, and currently works with inner city minority youth in Richmond, CA and refugee and immigrant students in Oakland. She is actively involved with South Asian, Muslim and API organizations. She is also involved in Democratic politics, and is currently on the board of the East Bay Young Democrats and is a founding board member of the Black Young Democrats of the East Bay. She is also the South Asian political Blogger for Hyphen magazine, a national Asian American magazine and blog.