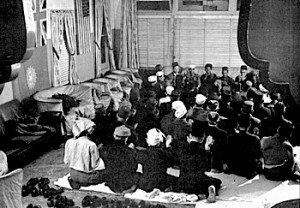 At the turn of the 20th century, news reports recorded a small, transient population of East Indian maritime workers living in the sailors’ boardinghouse district on the southern tip of Manhattan. By time of the First World War, thousands of these men were moving in and out of New York on British steamships. As colonial workers bound by long-term contracts, they faced low wages and indenture-like conditions on board their ships. At the same time, their labor was in demand in U.S. steel, munitions, and other industries onshore. Between 1914 and 1917, increasing numbers of Indian maritime workers jumped ship in New York. While many made their way further inland to take up factory jobs, scores of ex-seamen stayed in Manhattan, where they found work as dishwashers, line cooks, doormen, and elevator operators.

These men were predominantly Bengali Muslims who had entered the maritme trade in Calcutta, but the population also included ex-seamen from Punjab, the Northwest Frontier, Goa, and Ceylon. Early on, they lived near the West Side waterfront, in the neighborhood known as the Tenderloin, as well as on the Lower East Side, but by the 1930s, many Indian ex-seamen moved uptown to Central and East Harlem. Here, they joined much larger streams of migrants of color from the U.S. South, the British West Indies, Puerto Rico, and Cuba. Many of the men married within these uptown communities. A few opened Indian restaurants in Harlem, others did so in the theater district, off Broadway – these were some of the earliest establishments serving Indian food in New York City. After 1947, when East Bengal became part of the newly-formed state of Pakistan, a group of New York’s Bengali ex-seamen founded the Pakistan League of America an organization which, among other things, held yearly Eid celebrations that brought together what had by then become a unique multiracial community of South Asian ex-seamen, their Black and Latina wives, and their mixed-race children.